Bollywood-Vicenza: the sodality is born

AT THE ITALIAN FAIR IN MUMBAY, INDIA
Today and Wednesdays in the presentation of “Destination Italy” Enit and Vicenza é tell the experience of the maxi set

Bollywood-Vicenza
The sodality is born 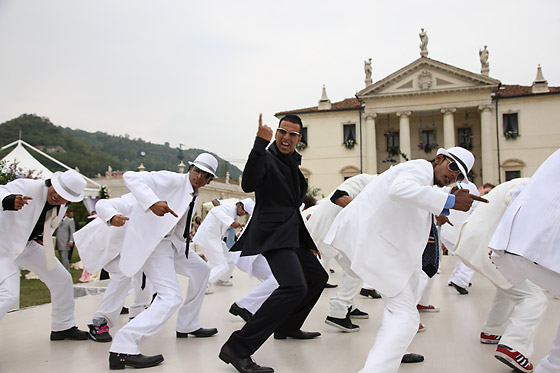 That one of Indian films in the vicentino seemed a small joke. There was who had not bet us two money. Who had defined like dishonourable the presence of the quad and the bikers in Piazza dei Signori, the main public square of the town. “Kanbakth Ishq” means “Incredible love”, the film of the Nadiadwala Grandson Entertainement shooted between september and October also in the Vicentino, has been revealed more powerful than spot and advertising investments never tried before: the palladian architectures and, that they have made from background to the history of love between two star of the bore of Akshay Kumar and Kareena Kapoor, are now ready to go around of the world, with to the images of Silvester Stallone that has participated to first part of the film. It could be the start of a new season for the Vicenza locations: Today at New Delhi, in India under the reflectors there is also Vicenza. Inside of the ten days that over recent years promote the culture, the tourism and the Italian products in India, there is a convention in which Carla Padovan of the Vicenza è Consortium, on assignment of the diector Vladimiro Riva, will speak about Vicenza like possible partnership of Bollywood, the greatest cinematographic industry of the world, after to have accommodated the important production and the director Sabir Khan. Beside her Matteo Marzotto, vicenza's man of great entrepreneurial family that in summer has been name new president of the Enit, the agency of the tourism that promotes Italy in the world.

The same presentation will repeat Wednesday to Mumbai, in both in cases with beyond 500 between journalists and operating present Indians. “Exciting moment” defines it Carla Padovan to the departure, but for superstition it does not want to say more: certainly there is that the Indiana production - arrived after other experiments of Vicenza film commission with Korean and Japanese producers - has been much satisfying and has put the eyes on others location, besides Cordellina villa and the historical center of Vicenza where the film has been turned. Three weeks of job, the 2 million euro involved, 200 engaged actors and about 50 of local appearances scovate from Sandrigo's(of adoption) Topcieva Pozzato. The “tourism” of films is promising: they know well in Switzerland where the numerous Hanns or accommodated set of Bollywood and where the Indians who economically can have arrived to crowds. New the rich Indians are the objective of Eugene Locksmiths, Enit director: the sale of tourist packages for Italy this year has grown of 25%, this say the last partial data.
The roadshow to New Delhi, Mumbai and Bangalore in order to introduce the Italy destination has been organized from Salvatore Iannello, Enit responsible in India, that it emphasizes as three operating Indians have dedicated brochure exclusive to Italy and for the first time tour operator the Kuoni has realized a catalogue of 80 pages for the Italian regions. While a piece of "Vicenza è" flies in India, the flow of journalists for the 500° palladian anniversary: recently the visit of the German writer Petra Altman interested to the literary places. For the publishing house Ache-Werlag of Amburgo it is compiling a book on the literary routes in Veneto region of 150 pages that will be published in summer 2009. From the 5 to 12 November it has been accommodated a troupe French that has turned the documentary “Earth of a man” with the direction of Jean François Neplaz and Elisa Zurlo, produced from the Shellac South, on the traces of writer Mario Rigoni Stern and the places of the Plateau of Asiago. Always some days before it has arrived the first German net tv, the Ard Germany, for a documentary of 10 minutes about Andrea Palladio with images of the extension to Barbaran da Porto palace, the center, some villas and the 'Malcontenta'; always the Ard tv the 30, day of the presumed birth of Andrea Palladio in 1508, will transmit a long documentary turned from Brigita Ashoff on modernity of the architect. The slid week visits in city that of Nina Caplan of the review Time Out London; from the 2 to 4 December in arrival a journalist of Daily Mail.

Search in the site

Visit www.vicenzae.org,
the tourism portal of Vicenza
and its province.